The purpose of business is ….creating value for customers

In an interview with John Durie in Jan 2014 Sam Walsh, the former CEO of RIO was quoted as saying
“At the end of the day, it’s all about shareholder value, and that’s why technology and innovation are at the core of how we run our business.”

There is no doubt that there is a prevailing view that reason for the existence of a business is Shareholder Value. Over the 40 years, I have consulted with business leaders it is hard for me to count the number of conversations where Shareholder value (and Profit) were included in the Core Purpose or Mission of the business. Remember the concept of Core Purpose is:
“The organization’s fundamental reason for existence beyond just making money – a perpetual guiding star on the horizon: not to be confused with specific goals or business strategies.”
Collins and Porras: Built to Last Successful Habits of Visionary Companies.(1994)

Shareholder Value as a dominant paradigm in my view changes the perspective of Boards and Chief Executives throughout the country. In working with Public Companies over the years, I have seen the following:

• A visible sign of the focus on Shareholder Values in one company was the share price lit up in the Foyer of their main building so everyone could see it on entry and exit.
• In a second company the CEO spent over thirty minutes in the opening presentation of a strategy session looking at the achievements (on his watch) regarding growth and shareholder value. He did not mention once the future Business Environment or customers. He did say that as a Public Company the shareholders expected growth.
• In a third company, the CEO demanded that the existing corporate mission be amended to include shareholder value

In each of these cases, there is a symbolism in the thinking of the business leaders, which drives the focus on short-term thinking, risk avoidance, and self-interest.

This philosophy appears unquestioned. Sam Walsh was CEO of an iconic Australian mining business. It is fair to say this statement reflects the view today of many if not all of the ASX company ceos and Boards.

2. Why does business exist?

Answering the question “why does this business exist?” is challenging. It goes to the heart of a very human question, what is our reason for living?

Many businesses fail to address this question by settling for a simpler, lower order answers? They describe what they do rather than why they do it?

Why do we exist – to do something? It’s safe. It is comfortable.

Simon Sinek captures it well in his TED talk. (link)

Another cluster of businesses settle for shareholder value and or profitability as a reason for existence. Again it is an easy and safe conversation and very measurable. It is a little like saying at the next Olympics we want 5 Gold medals. So in which sports do we want them? Doesn’t matter really!

3. Role of Board – Stewardship

Surely in a Public Company, Directors first responsibility is to the business – to make decisions in the best interest of the business. In fact, the role is one of stewardship. Directors must focus on the best interests of the Company as a whole first, and that may or may not always include shareholder value. The Shareholders are only one stakeholder. So why are they more important?

Who might the other stakeholders be: A major stakeholder is the community – local, national Global.To explain this, the equity quadrant is helpful. 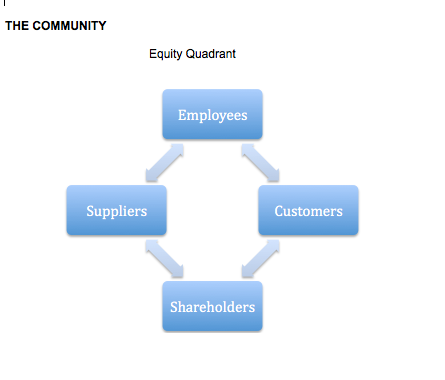 Stakeholder Quadrant (what is equitable?)

Each of these stakeholders has a vital interest in the outcome of any business decisions.

Why do shareholders get a bigger or greater “share of value”? I suspect it is partly due to the rise of Institutional investors whose only focus is the return to shareholders. There is no real reason for Shareholders to benefit any more than the other stakeholders.It is not hard to find quotes after the sale of business from chairman and directors who say:

It was a great outcome for the shareholders!

The question might be asked what about the community or anyone of the other stakeholder groupings.

There is a lot of money to be made in the buying and selling of shares and the sale of business. Investment banks, investors, lawyers, accountants and other interested parties including directors and executives.

An interesting statistic in the Mergers and Acquisitions market is:
“…..study after study puts the failure rate of mergers and acquisitions somewhere between 70% and 90%. “Tim Sim from PEP is quoted some research conducted by an economist at UNSW Peter Swan. It indicated that:

Research carried out by an economist at UNSW Peter Swan and referenced by Tim Sim highlighted that:

Independent board directors have destroyed between $30 billion and $50 billion of shareholder value in the top 200 listed companies on the Australian Securities Exchange over the past decade, according to research co-written by a leading business economist.

Naturally, it is disputed by the stakeholder groupings who support the concept of independent directors. There is a question about the time the study and the methodology used.

If the failure rate of mergers and acquisitions is so high why is there not further research being conducted by appropriate bodies to discover how much value is destroyed (or created) in these “deals”. With other ‘disasters in society, there is all manner of inquiries.

Given that the lifespan of Public companies is reducing at a rapid rate. What happens with other “disasters” in society? The Government spends $10Billion per year on R&D in a whole range of areas what about value creation and destruction in business.

The sale of Australian businesses to overseas interests is always an emotional debate, but there are real questions to be asked? Other than the shareholders, who are the real beneficiaries?

What value is created for the business and other stakeholders?
If outsiders can see this value what are the current directors doing?

5. The real conversation in Business

Shareholder Value: Corporate correctness dictates that publicly traded enterprises maximize “Shareholder Value”. Don’t confuse this with anything of real value, of any human value. Shareholder Value is a fancy label for pumping up the price of a company’s stock as quickly as possible so that those in the know can cash in and run before the stock sinks.This statement by Mintzberg has refreshed my view about the nature of business.

This statement by Mintzberg has recreated my view about the nature of business.
He captures it well. “Don’t confuse shareholder value with anything of real value!” The pursuit of shareholder value distorts the real conversation in business.

The quest of shareholder value changes the real conversation in business.

The reduction of everything to a conversation about whether it is Profit or Shareholder value is a form of intellectual laziness, and it stems from investors who have little interest in the business and are only interested in the size of their returns.

As “a wise person” explained to me once: profit is an imperative. It is like the air you breathe. You can’t live without it.

Do you know anyone who lives to breathe?

Business, in fact, exists to provide products and services that meet the needs of customers and to create prosperity for the community. I wonder if there is any possibility Australia having a debate about the wealth creation and the creation of prosperity.