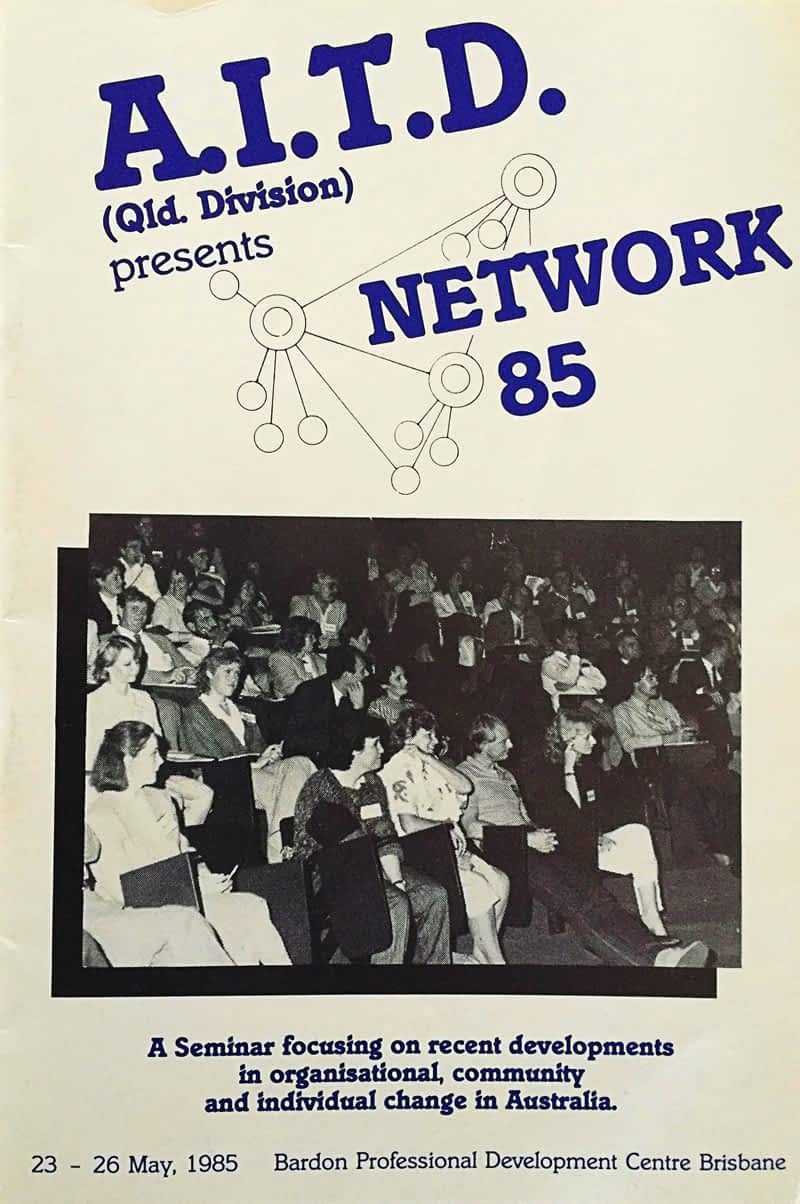 This week the Blog is from my archives! It is a paper I wrote after an event I worked on in 1985. Some of us were members of the Australian Institute of Training and Development. At that time our passion was Organisation Development. An element of the OD movement was the area of social technology. This Conference was a contribution to that world. We explored the boundaries of Conference Design by inviting the participants to design the event at every stage. The paper was published in Training and Development in Australia in late 1985.

(A paper prepared by the Planning Committee for NETWORK ’85)

NETWORK ’85 was a three-day professional development event conducted in Brisbane for people involved in organisational, community and individual development. It attracted nearly 200 people from Australia and New Zealand. In writing this paper, we are attempting to document:-

NETWORK ’85 was the outcome of a meeting of five people with energy and a vision about  a contribution to the Australian Institution of Training and Development. A.I.T.D. (Qld) has been chugging quietly along with Trainer’s Days being our one consistent event and many other irregular professional development and social activities.

The actual source of the design came from one of our members who had attended Seminar “83 developed and conducted by the Melbourne O.D. Network. This event had a number of characteristics which we adopted, and for which we are grateful.

In the development of NETWORK ’85, a number of considerations were prominent in our thinking. These were:-

Our aim was to use a participant-centered approach in determining the content of NETWORK ’85. The main steps in the process of developing the seminar were:-

The initial stage was concerned with developing a common vision about what we were doing, the stages we needed to work through, the themes of the event in both its content and process. Although these factors were enhanced over time, the original concept remained to the end.

An initial mailing was circulated in order to ascertain the level of interest in this type of event, to commence the collection of information about the nature of people’s interest, and to prompt potential participants to offer to lead/ contribute a session during the event. The first survey outlined what we envisaged in very broad terms and requested that people notify us as to:-

The response to this survey was extraordinary and it gave us the energy to continue. Some people actually forwarded the registration fee at this stage.

The second mailing provided more details to those who had indicated interest in the Approach, Structure, and Content, and requested that those intending to come to NETWORK ’85 prioritise the topics offered. If the 42 papers/ sessions offered, the voting process surfaced 20 which then became the basis of the pre-programmed sessions.

Publication of the Programme and Formation of a Larger Network

After the prioritizing process, a brochure was developed and forwarded to all those who had registered and expressed interest and was also circulated widely Queensland. It was only seven weeks before the seminar began that everyone knew what was actually programmed (in terms of content).

At this time it was also important to build a larger network of people to assist us in conducting the event. These people had volunteered through the early letters and through notices placed in the A.I.T.D. (Qld) newsletter. Various tasks were identified and allocated, and the larger network had been formed.

The seminar was held at an excellent venue – the Professional Development Center at Bardon. Some of the key design features of NETWORK ’85 included:-

The second phase of the evaluation consisted of a more structured questionnaire which the participants were asked to return to us after 3-4 weeks.

An undertaking was given to document and distribute these lists to participants.

NETWORK ’85 had certainly been the most significant event in the recent history of A.I.T.D. (Qld). To capitalize on the energy it has generated, it needs to be directed in the area of networking for professional development. The profession we are in is a relatively new one and the primary way we have to learn is from each other. By taking risks and sharing our experiences, both successful and otherwise, we can enhance the richness of our work.

A.I.T.D. (Qld) will certainly be conducting another networking event but also it will be active in other areas. There is a need to work more closely with Tertiary Institutions in the development of programmes and courses; there is a need to be active at a political level to make our contribution; there is a need to support speakers from Interstate and Overseas so that we do not become insular in our thinking. These are many challenges for A.I.T.D. (Qld) but none more important than building a strong professional and personal network.