Married and sailing towards 50 – feeling valued is the key?

In the early years of marriage a major learning process starts (and it never stops!). Learning to live with another person who is unique is the challenge. The early romance becomes a day-to-day process and life takes over. Working, playing sport, entertaining, maintaining relationships with friends (single and married), building a new friendship circle together, buying houses, having children – all are demanding and distracting. These things require commitment, and even new skills. On reflection, one thing we did to remain focused on our marriage, was engage in an education program with newly engaged couples – helping them on the journey to marriage. What did we know? Not much really, but we learnt a lot about marriage. What I did know was that marriage was a commitment for life and it seemed to me that it was more than important. If we were going to have a great marriage, it would require a level of effort, which was at least as much as I would put into a career. During this time we attended a number of programs for couples. Together, we also organised a Marriage Enrichment Program for other couples.

A core learning which has been the platform in every sphere of our life is modeled below.

When a couple comes together, a new ‘person’ is created. This person is ‘the relationship’. This relationship has needs, expectations, wants and hopes (not unlike a child). For this relationship to survive, it requires work and it involves giving and taking. It requires a commitment to share the load. Both parties putting in time and energy every day, every week, every month and it goes on 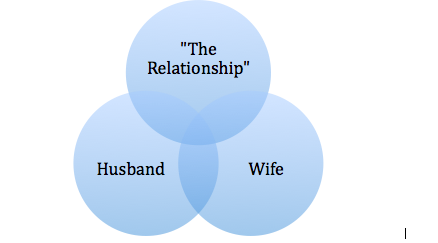 There are times when the energy sharing is unbalanced – when one party is doing more taking than giving. This can only go on for so long before cracks appear in the form of ‘disagreements’ – disputes about all sorts of issues. In the end all of these issues can be reduced to the concept of ‘feeling valued’. Any time one party feels unvalued there is an issue, either overt or covert. These issues need to be attended to along the way. Not addressing them leads to the relationship being drained of energy. The concept of valuing your partner creates energy. Two people valuing each other creates a huge ‘storage system’ of energy. In the tough times this energy is like a bank. You can make withdrawals to nurture yourself and the relationship.
If there is a history of two people valuing their individual priorities and needs more highly than the relationship, the bank is depleted.  There comes a time when there is nothing to draw on!
At first pass this concept is obvious.

I have mentioned before that some stories have a haunting effect in that they leave a mark.

Very early in my working career not long after we were married I remember reading a story which left an indelible mark. It went something like this.
(I have never been able to track the source so if anyone knows it please let me know.)

A young couple marries and in the course of events have a number of children. In that time the man’s career was considered to be the most important issue, so decisions were made to support it. There were a number of promotions and geographical transfers, both with the US and Internationally.
His career was, by any standards, a success. Along with this were many long days, weeks at a time away, much home entertaining and business entertainment generally. He was successful and financially they were secure. The woman had been a full time mother and had been part-time employed when family commitments allowed it.  The woman carried the responsibility of the family.
At about year 25 of their marriage, he arrived home to announce that he had been appointed to the ‘top role’ and it meant one more move – to a major city. He was naturally very excited as this was what he (they?) had worked for.
His wife was not so excited. Her response was profound.
She said she was not going! It was one move too many. She was finally happy in a place with friends and feeling very settled. She wanted to stay where they were.

He was shattered and confused, having completely missed the signs that this relationship was not travelling as well as he thought.

After some reflection his response was, ‘I have done all of this for you and the children’ and she said, ‘the children have gone and I am not going!’

Some stories just sit with you and I have often reflected on this. True or not, it is profound in its simplicity. Here was a relationship whose energy bank had run out. Who knows how it all finished but it was a story I have never forgotten and I have told it over the years.

In writing this story, there is no sense of what this marriage was really like, but questions and images emerge which are confronting.

I have seen stories such as this play out with a number of colleagues and in my extended networks over the years. One day they are confronted with the fact it is over. (And in some cases they did not see it coming!)

Only recently I was lunching with a colleague who I had not seen for quite a while. During the course of the lunch he told me, he and his wife had separated after 35 years. Naturally he was emotional about it. In summary he said they had both focused so intensely on their careers they has lost sight of each other. There was no energy left to sustain the relationship!

As we all know, relationships are fragile and a robust relationship requires a lot of work. I read the above story in the late 1970s. It was another world. Women were emerging as smart independent and free to choose from so many more options. Traditions were being challenged

Now, in a world where the role relationships are more equitably balanced, the challenge is more difficult. Creating the energy to sustain a married relationship is a lifetime commitment not a spare time activity. There is not a human being on earth who does not want to feel valued. I married a woman who I was able to work with side by side. While I am not sure I have always carried my share of the load and while there have been numerous times that we failed and got up again, we have been married 41 years and are setting sail (and still working) for 50 PLUS?