Disruption: Innovation: Change – it is about learning!

Nothing lasts forever. What we know is the universal cycle is ongoing. Disruption, Change and Innovation are an important stage in the evolutionary process.

Birth (New Life) – Life – Death then rebirth is central to it all.

Innovation (and or New life) – Change/ Disruption – a new cycle starts. For us as human beings, it is a continuing struggle.

It is in this context I want to reflect on my last blog on Disruption, Innovation, and Change -who wants it? And continue the conversation.

Innovations (while similar), on the other hand, often allow us the luxury to choose the rate of change.

Understanding that cycles exist is an important learning.

It seems that when disruptions (changes) occur we are shocked, disturbed and in some cases outraged. How dare they?

We resist actively or passively and over time, come to accept that the change has occurred. When it is outside our control (imposed), there is an outpouring of anger, disillusionment, and frustration. We anticipate how the change will affect us. There is evidence of this everywhere, certainly in the political process (e.g., the recent US election). There is still very public grieving –wailing and gnashing of teeth. It is no less when there are disruptions in the business world.

Innovation is different. Innovation is often something we choose to adopt. It may take years or even decades, but the process of diffusion occurs.

In the business world, new structures/new systems/products or business models will inevitably bring some resistance. When the Government intervenes, there can be a significant response and policy changes might emerge. When market forces create the disruption, e.g. Uber,  It is fair to say, disruption, if it occurs (and there is no control over it), causes angst. Human beings have a basic need for security and stability. Business models are emerging which are challenging the very nature of business and work, and people are concerned and fearful.

Stages of the Grieving Process

In life, disruption takes many forms. An unexpected death in the family is profound and there is sadness and grieving.  Elizabeth Kubler-Ross documented  some stages of grief:

This model resulted from numerous conversations with people who were experiencing the grieving process. As with many process models, it is not an exact science but a representation of the human story. Everyone will experience it differently. There will be overlapping of stages – missing stages and regression, but in it all, there is the basis of a conversation on how people manage (or not manage) a significant disruption. It may also provide a mechanism to allow people to understand their experience and thus build resilience. Death is an extreme example.

One only has to look at the recent US elections to see groupings of people managing (or not managing as the case may be), the “loss/death of a dream” – a small death! Such was the shock, denial and then anger, that universities and businesses were providing counseling to enable people to cope with the “loss” of a dream.

In a business context William Bridges in his work Management Transitions has defined change thus:

When major shifts are occurring, individuals and the community experiences a range of emotions. They respond in different ways. It is happening in Australia (and the rest of the world) at the moment.

The critical variable is the sense of control we have over these major shifts.. In Australia, we know there is a need for some significant changes. There is the opportunity to plan for/prepare for it in a “rational” way BUT………

Bridges hypothesized that in conjunction with changes, there is a process of transition. It is this process which human beings want to avoid. It is by definition painful and not something one enjoys. 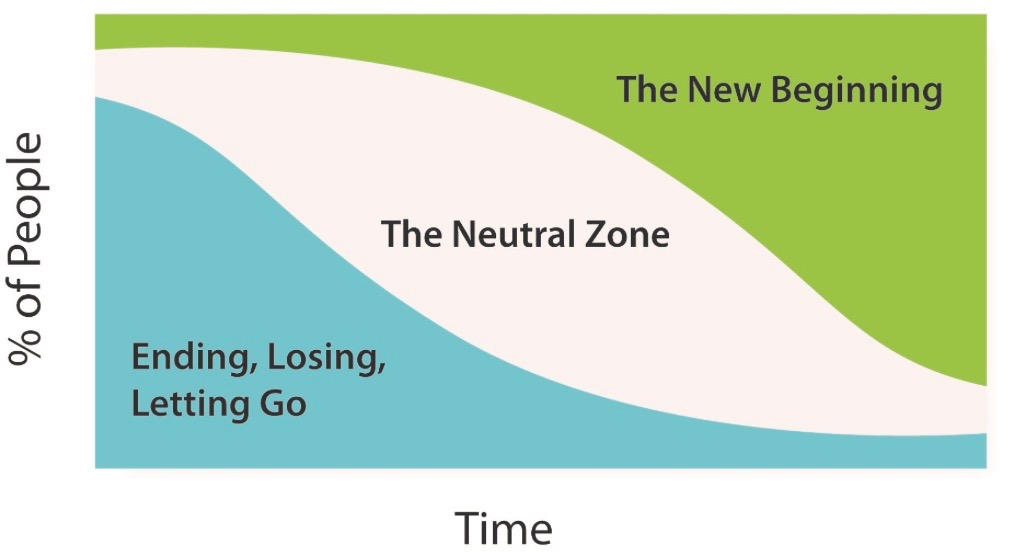 Transition is a psychological process that involves three stages:

These three steps cannot be avoided.

There is real possibility of creative renewal

Again this work is descriptive rather than empirical and is designed to help people manage in a time of disruption and/or change.

The above model has been useful in introducing an awareness of what is happening at a human process level. Over many years I have worked with individuals, groups, and organizations as changes were being planned, imposed, or emerging. Creating a space which allowed people to explore what was happening in many situations is cathartic. Discovering that everyone is on a similar journey (Feelings of loss, fear, bewilderment were prevalent.) and knowing it was OK to talk about it created an opportunity to acknowledge the struggle occurring. In some cases, men and women have wept. When these disruptions occur, it is easy to lose sight of a bigger picture. It might involve the loss of a job, a position or a work role or a dream one has held for a long time. While working with a religious organisation, it was their confrontation with the decline in numbers and the ultimate death of the organisation as they knew it. The work for them was difficult.   Acknowledging their time was over and to creating new and very different structures allowed their work to continue

As these disruptions occur and continue at an accelerated pace, it is important to understand that this is not new. Maybe it is just more visible.

The Technology Adoption Lifecycle names some consumer segments which exist in the technology/project life cycle.

It is just another way of highlighting how people manage Disruption Innovation or change and it describes the rate of diffusion. In this context, it is possibly less traumatic, but it is no less dramatic. Developed in the agricultural sector to explain how new technology was adopted in farming communities, it names the following stages or consumer segments:

When I look back in my life, I can identify many disruptions, changes, and innovations. In my younger years, I had little awareness of the cycles as they occurred, but life has a way of educating and I have been lucky enough to work in an arena where change has been the dominant motif. I have been privileged to work with many organizations going through profound changes; My life is enriched as a result. For all in the process, it is not without a form of existential pain.

As one leader said to me late one evening as he was weeping with anxiety – how do I know we are going in the right direction and making the right decisions? Peoples’ livelihoods are at stake!

There is no answer!

The cycles are always evident if you take the time to look (and reflect). Knowing them is reassuring and helpful but it does not change the pain.